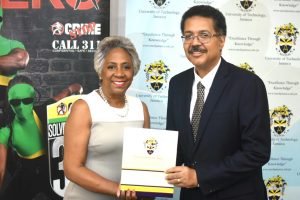 Jamaicans are being encouraged to use 311tips.com, Crime Stop’s latest initiative to report illegal activities.

The website is a collaboration between Crime Stop Jamaica and the University of Technology (UTech) and is intended to help reduce the scourge of crime on the island.

It was launched on Wednesday at UTech’s Papine campus, where the official signing of the terms of the agreement between Crime Stop Jamaica and UTech also took place.

Sandra Glasgow, chairperson of the National Crime Prevention Fund, through which Crime Stop Jamaica operates and UTech President, Professor Stephen Vasciannie said the technology comes at a time when Jamaica is seeing an increase in criminal activities.

“This partnership with the University of Technology, Jamaica, which has developed yet another secure way of sharing information on crime and violence, is priceless,” Glasgow said.

“UTech is fulfilling its mandate as our national technology university, having created the URL www.311tips.com as a gift to Crime Stop and the people of Jamaica to act as another catalyst for residents, especially our youth, to be involved in crime mitigation,” she said. 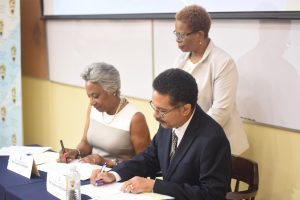 For his part, Vasciannie said, “When Crime Stop Jamaica approached the university to discuss this partnership to enhance its mission to reduce crime and violence in Jamaica, it was not a difficult decision to make to pursue such collaboration for the good of the nation.”

“UTech, Jamaica is pleased to be among the partners with Crime Stop Jamaica in its mandate to continue to reduce crime in our country and to discourage criminal activity,” he added.

The UTech president said the institution is keen on offering intellectual resources and expertise to provide solutions to an area of significant national concern.

The software is owned by UTech but will be operated by Crime Stop Jamaica under the terms of the agreement.

Individuals who give tips on the 311tips.com software will remain anonymous, as all trace will be removed from the system, according to director of the National Crime Prevention Fund, Brian Schmidt.

He said the only interaction that will take place between Crime Stop and tipsters will be the code that the software generates after a tip is given. This will also be the channel to collect rewards.