The crimes most used to generate illegal money, according to the expert, have been cybercrime, smuggling , counterfeiting, fraud and drug trafficking. 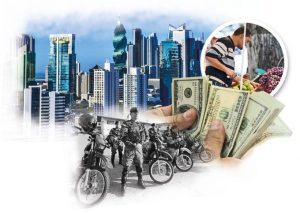 The crisis caused by  COVID-19 pandemic has caused criminal organizations decicated  to money laundering, as a result of drug trafficking, suffering  a decrease in their criminal operations.

The closure of banks, businesses , airports and other types of activities has accumulated money from the profits of smuggling, drug trafficking, extortion and other crimes.

This will make those companies and businesses that have been affected by their income from this virus more vulnerable to money from illegal activities reaching their hands, once it begins with a return to normality.

Panama does not escape from  this reality, as it is a transit country and because it has large industries and businesses , that have  being affected and will need economic solvency to be able to recover when the pandemic passes.

Faced with this, Alejo Campos, Director of Crime Stoppers, organization that is dedicated to promote  the culture of anonymous reporting worldwide and works with the Panamá Public Security  Ministry , stated that organized crime despite the pandemic has not been detained, but has migrated to other illegal activities, which have generated a lot of money that has accumulated, because they have no way to launder it.

“Currently there are companies, small businesses and people who are dedicated to providing some type of services, which have seen their income affected, to the point of being almost bankrupt, that are going to need cash quickly to reactivate their businesses, which are to be vulnerable so that organized crime can launder their money, “he said. ‘

55 million packages of contraband are distributed in Panama annually. 165 million dollars annually generates this contraband, since the packages are sold in $ 3.

Given this, Campos said that the alert they are issuing to the public is to be aware of this and do  not accept money from unknown people and structures or from financial institutions that are not recognized.

Faced with the issue of money laundering, the regional director of Crime Stoppers added that institutions such as Interpol and Europol call on the countries of the world to look for measures that are proactive and preventive, considering the new ways of laundering that will emerge in the economic reactivation by COVID-19.

It should be noted that the most vulnerable sectors to launder money from the economic reactivation are small and medium businesses, service providers, construction and real estate.

There is also the entire services chain  related to national and international trade, specifically everything that involves import and export.

According to Campos, together with the Panamanian authorities of the Public Security Ministry  and the Financial Analysis Unit (UAF)  have been working together with  a series of alerts in order  to prevent companies and businesses in the country from falling into the clutches of these networks dedicated to money laundering, illegal activities.

The expert added that these transnational criminal structures use local criminal groups to place this illegal money, sometimes using businessmen and independent people who are given small financial support to avoid generating any type of alert.

Alejo also indicated that, in some way, the terrorist groups have taken advantage of the COVID-19 pandemic to make publicity  in favor of their cause, something that is being seen in Central America with the gangs that come out to “help” people. that are needed.

In addition to this, he pointed out that criminal networks have taken advantage of the pandemic to mutate into smuggling and counterfeit products such as masks, gloves, cigarettes and personal care items such as soaps, creams, producing high sums of money that they will seek to legalize.